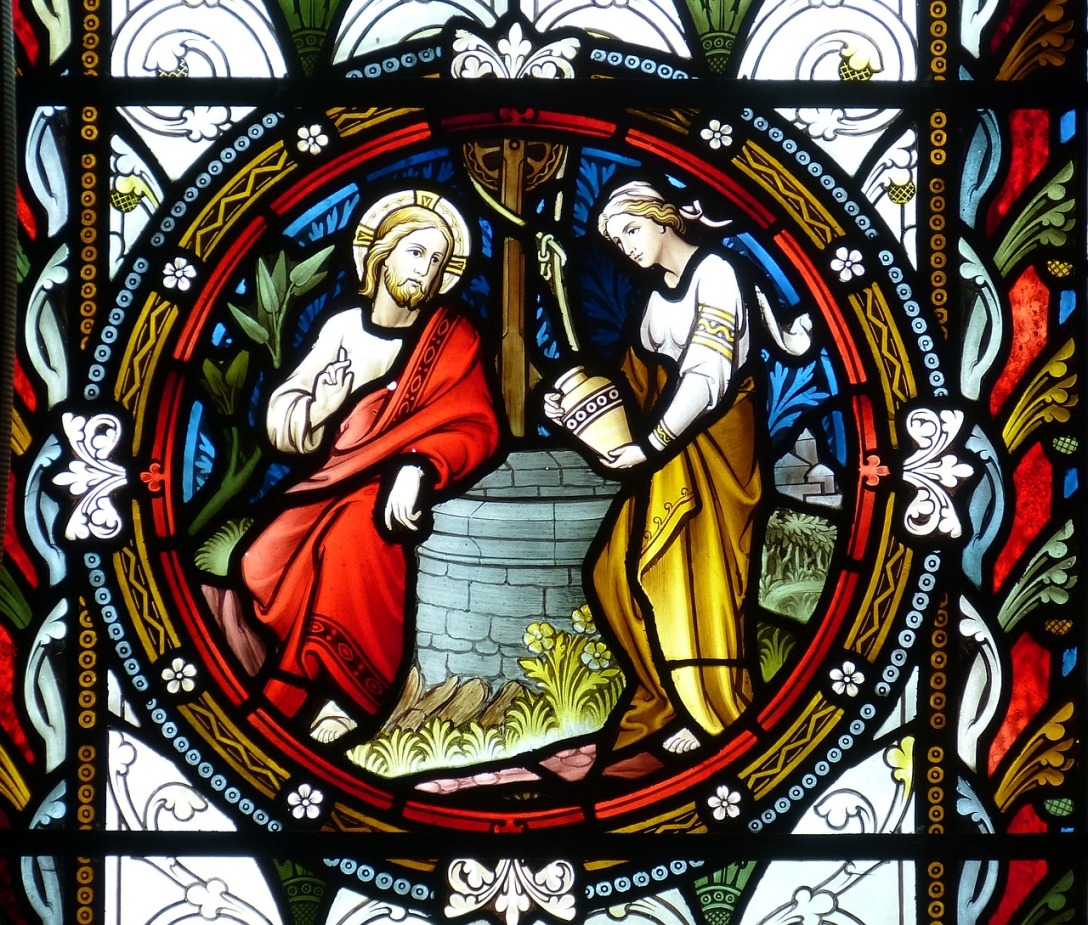 A couple of weeks ago I read Final Words From the Cross by Adam Hamilton. One of the strongest points he makes is from pages 94 and 95 where he describes Jesus’ interaction with the Samaritan woman at the well. After reading it, I was stunned, and actually stopped reading the book for a few moments before rereading the section again. I knew that I needed to write a post about his thoughts. This is what he says,

“Near the beginning of Jesus’ ministry, he came to the town of Sychar, which is modern-day Nablus. There he sat at Jacob’s Well, while his disciples went into town. Soon a woman came to meet him. He asked for a drink, and she gave him one. Then he said to her, “If you knew who you were talking to, you would ask of me and I would give you living water and you would never thirst again” (see John 4:10).

The time of day when this conversation took place is significant. It was around noon. Usually women went to draw water in the morning and at night. They did not come mid-day. Yet this woman did. Why? Because she wanted to come when the other women would not be there to scorn her. This Samaritan woman had been divorced and remarried five times and was now living with a man who was not her husband. She did not have the social standing or security that came with marriage in ancient times. The other women would have scorned her, seeing her as a sinner. For many years she had been thirsty for love, but none of her five husbands had satisfied this thirsting in her soul. She was thirsty for more than water on the day she arrived at Jacob’s well.”

We Have All Sinned

Mr. Hamilton notes that Jesus met the woman around noon. This detail is from John 4:6, which reads, “Jacob’s well was there. Jesus therefore, being tired from his journey, sat down by the well. It was about the sixth hour.” The sixth hour corresponds to what we think of as noon. In the first century, most women would have gathered water at morning and at night to avoid the heat of the day.

The Samaritan woman was different.

She was avoiding something else. As it says, she came to the well at that time “[b]ecause she wanted to come when the other women would not be there to scorn her. This Samaritan woman had been divorced and remarried five times and was now living with a man who was not her husband. … The other women would have scorned her, seeing her as a sinner.”

Now, I do recognize that it is remarkable how many times this woman had been divorced and remarried, but that is not the only thing that is incredible. Implied in the above quote is the idea that the other women did not consider themselves to be sinners. That is also amazing. Because this woman committed so many sins, they were blind to the ones they did.

Do we sometimes forget that we have also committed transgressions against God? I hope that we don’t. Even though Christians are often referred to as saints in the New Testament, we know that none of us are without sin. Sometimes we need to remember the words of the apostles where they told us the same. For instance, Paul tells us, “for all have sinned, and fall short of the glory of God” (Rom. 3:23). Likewise, the Beloved Disciple warns, “If we say that we haven’t sinned, we make him a liar, and his word is not in us” (1 John 1:10).

Let’s Focus on Salvation, and Not Sins

The reason I mention those verses are so that we have a moment of self-reflection. Look at yourself. Are you tempted to treat others with scorn? Do you look down on those who have not obeyed the Gospel? I hope that you don’t! Even if we have not committed the same sins as the Samaritan woman, we have all done our fair share. Any of it could separate us from Him.

Consider the predicament of this woman. She was not a follower of Christ, yet still desired Truth. In a similar manner, we have all been outside of Christ, but at one point we were humble enough to seek the Truth.

When Jesus was with her, He did not dwell on her sin. He already knew what she had done. Instead, the Lord continually focused on salvation. We should do the same.

Look at how often He speaks of eternal life with her,

These were all key ideas that Jesus needed to share with the woman. He took notice of her current situation, which was related to physical water, and used it to teach salvation to her. He desired to draw her positively toward salvation, not push her away back toward sin.

It is true that he did mention her sinful behavior, but He used it as a means to reveal Himself to her. After He tells her that she has had five husbands, and that the one she was with was not her husband, she was able to recognize Him as a prophet (John 4:17-19). It is also noteworthy that these comments about her sinful behavior come after she confessed a desire to drink from the well of water springing up to eternal life (John 4:15).

She still didn’t fully understand what Jesus was teaching, but she was on the right track. The Lord’s mention of her sinful action were not the primary motivation for the conversation. Eternal life, worshiping the Father in spirit and truth, and revealing Himself as the Messiah were far more important.

Even though Jesus did not turn a blind eye to her sin, He also knew that she was ready to hear the Truth. When we are speaking with people about the Lord, there may be a temptation to focus too much on the sins that the person is committing.

Such a discussion is important. Turning away from sin is necessary. God desires us to repent, and give up those things that He hates.

However, if the person you are speaking with knows that he or she is sinning, and is ready to turn back to God, we don’t need to dwell on such things. He or she is already ashamed of prior behavior. Once that has been established, we can move on to concepts of salvation instead.

On the other hand, if someone is not there yet, we should not look down on him or her. We don’t want to be so harsh and abrasive to others that people avoid us. Especially if such individuals are honestly seeking to know God’s will. We need to be approachable so that our conversations don’t shut down to the point of just being about the weather. In order to discuss more important matters, we should temporary look past the sin to see the person who is made in the image of God instead. He or she may be trying to learn about Him, but needs us to show the way.

Let’s pray to God that we be patient and approachable enough to do that, and have those meaningful conversations that demonstrate how to walk in the footsteps of the Lord.

What about yourself? How do you approach someone who is humble enough to desire Truth, but is struggling to find the way of salvation? Please share your comments below!

Stained Glass Window of Jesus and the Samaritan Woman by falco from Pixabay.
Jesus and the Woman of Samaria by Gustave Dore from Creationism.org.

I am simply a Christian. I seek to study God's Word and to share what I learn with others. By the grace of God, I do so on my website and on Twitter. I hope that you benefit from what I teach. If you have any questions, please feel free to send me a message. Thank you! View all posts by James Hutton